GEOLOGY OF THE BRADFORD SANDS

For several decades in the late 1800’s, this region was the most important oil producing region in the world.

Known since the1860’s as the Oil Regions, western Pennsylvania has an oil history that predates European settlement. Many of the oil reservoirs are very near the surface, and the multiple fractures in the rocks allow for oil to seep to the surface. Native Americans for centuries have used the oil as a medicine and for waterproofing of canoes as well other objects. The first discovery of oil by Europeans from North America probably came in 1627 by a Franciscan missionary travelling near Cuba, New York.

The global petroleum industry first got its start in the Appalachian Basin in northwestern Pennsylvania. In Titusville, Pennsylvania, Cornel Drake drilled the first well with the intent of finding oil hit “black gold” in the summer of 1859, at a depth of only 69 1/2 feet (21.18 meters), forever changing the course of modern history.

Think of a basin as a broad region where sediments were deposited in the geologic past, even if no sediments are being deposited there today. For example, the Appalachian Basin is currently high above sea level, located largely in mountainous terrain, and is no longer a basin. However, 300 million years ago, during the Devonian Period, thick accumulations of mud, sand, and organic material settled at the bottom of a shallow sea that was once located here. The alteration of these sediments, and the “cooking” (Maturation) of organic-rich muds is what gives us oil, natural gas and coal. 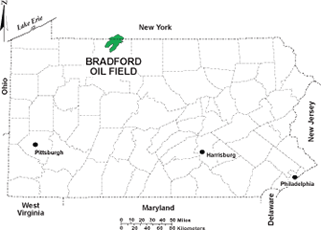 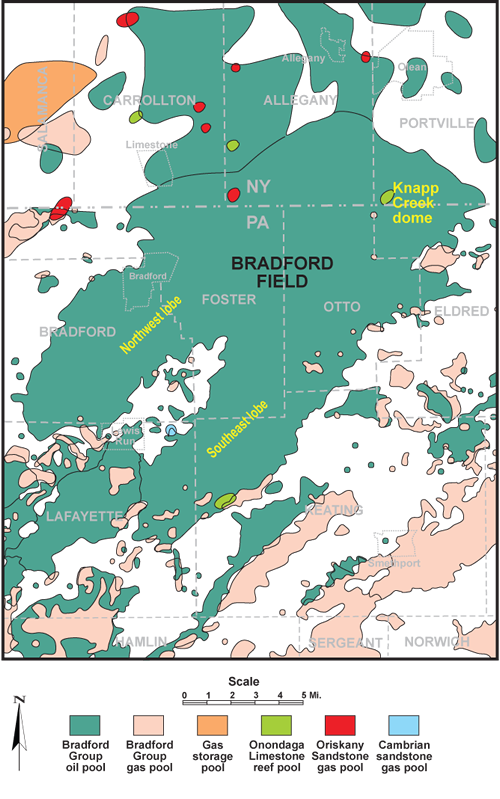 Most of the reservoirs in Pennsylvania are Devonian and Mississippian aged sandstones. These rocks are part of the western extent of the Catskill Delta, a thick wedge of sandstones, siltstones and shales that were deposited into a shallow sea beginning 400 million years ago. The source of these deposits came from tall mountains, located at this time near the current Hudson River of New York State. Highly porous sandstones became interbedded with shales in western Pennsylvania and New York. In many cases, the shales act as both source rock and trap rock for the hydrocarbons. The main trap types are structural and stratigraphic. Anticlines run parallel to the axis of the Appalachian Basin itself, trapping oil and natural gas. Stratigraphic traps are formed by alternating shale and sandstone layers. Some of these sandstone layers are not continuous and are trapped on all sides by shale. These form”pods” of sand known as “lenses”, and act as an effective hydrocarbon trap in the Appalachian Basin and elsewhere. Pennsylvania oil is very high quality crude, with considerably less impurities than most oil produced in the United States. Because less work in the refineries is necessary before the product hits the market, Pennsylvania oil is slightly more valuable than oil from most other places. 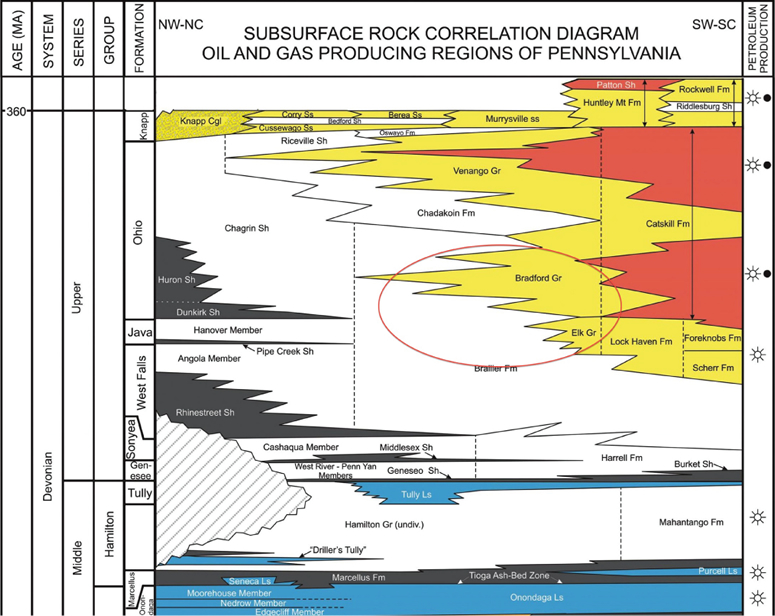 The most prolific oil field in the region is the Bradford oil field in northwestern Pennsylvania (McKean county) and extending into extreme southwestern New York (Cattaraugus County). Here, the oil comes from the upper Devonian Bradford sands, which are about 1000 feet (~300 meters) below ground and up to 90 feet in thickness. These reservoir sandstones and siltstones are not only thick, but are much more horizontally widespread than other reservoir rocks in the region. The trap is mostly stratigraphic (the reservoir sands are actually part of an ancient river delta that was surrounded by mud), though it does rest at the crest of an anticline. In 1881, this field produced an incredible 83% of the USA’s total oil output. Since its discovery in 1871, Bradford field has produced more than 1/2 billion barrels of oil. (The Paleontological Research Institution).